You are here: Home / Podcast / Managing Uncertainty Podcast – Episode #89: Looking ahead to 2020

In this episode of the Managing Uncertainty Podcast, Bryghtpath Principal & Chief Executive Bryan Strawser takes an informal look forward to 2020 and the potential risks that are just around the corner. 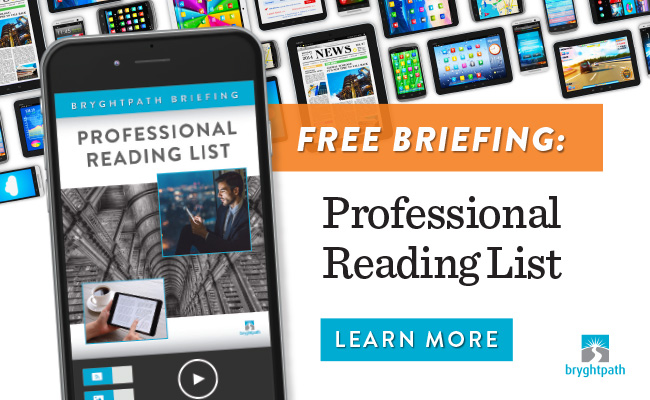 Bryan Strawser: Hello and welcome to the Managing Uncertainty podcast. This is Bryan Strawser, principal and chief executive here at Bryghtpath and this is our final episode for 2019. I’m recording this on Monday, December 30th you’re going to hear this later in the day. I am running solo today as it’s quite a snowfall going on here in the twin cities of Minneapolis and Saint Paul, Minnesota. But I wanted to take a moment and just provide a little bit of a look ahead to 2020. I believe we’re going to do a more formal kind of preview of the coming year with both Bray and I. But I wanted to hit on a couple of things that are on our mind as we turn the calendar here in a couple of days to 2020 and wrap up the decade of the 2010s and look forward to the decade of the 2020s.

Bryan Strawser: The first thing that is on my mind as we head into 2020 is that here in the United States at least this is a presidential election year. In addition to that, all of the United States Congress is up for election along with a third of the United States senate. So this is going to bring all of the inherent politics that come along with a situation in a calendar year like this, a presidential election year. I think it’s also, just given that our society has become more and more partisan and certainly has become, I think, a little more rancorous with the current presidents and they both support and opposition for President Trump’s policies, that’s going to be a pretty pivotal issue in the news and how businesses and individuals react in the year to come.

Bryan Strawser: The second and one that we’ve talked about frequently on our BryghtCast podcast and in previous episodes, in previous reviews that we’ve done of coming years, and talking about the top global risks, is that we appear to have come to the final decision when it comes to the United Kingdom’s exit from the European Union or Brexit. That was settled pretty much in the election that occurred in Britain just a few weeks ago. Brexit, the Brexit implementation bill has passed the UK parliament. We’re going to see that breakup occur, it looks like at the end of January, 2020, although that date may move around.

Bryan Strawser: But really next year in terms of Brexit, not only will Brexit be implemented but now it’s time for the real negotiation, and the real negotiation is, what will the relationship be between the United Kingdom and the European Union in the years to come? And there is a lot of negotiation, a lot of issues that need to be discussed and decided in the coming weeks and months. And that will have global economic implications, it’ll have implications for EU citizens that live in the United Kingdom today. It looks like they’ll be allowed to stay through a immigration scheme that is being developed and will be implemented. But there’s a lot of uncertainty about what this is going to look like, and Brexit will certainly be on the minds of all of us who are thinking about uncertainty and disruption in 2020.

Bryan Strawser: The third big one here in the United States at least, is that the auctions for the 5G wireless bands, wireless frequencies will go up for auction sometime in 2020 or 2021. Many States have passed implementing regulations around this. But the big thing is when the United States government goes to sell the actual bandwidth, goes to sell the actual frequencies and the 5G licenses that go along with that. That’ll be a big deal. 5G is a significant improvement over 4G and 4G LTE, and we will see billions of dollars likely be spent during the 5G auctions to bring 5G to life.

Bryan Strawser: The fourth area that’s on my mind as we go into 2020 is about recreational marijuana. We expect that recreational marijuana legalization will continue to move across the United States. It’s certainly a big topic of discussion here in Minnesota in our upcoming legislative session. We’ve seen legalization occur in several States, with, depending upon who you talk to, success or failure, which I think really goes back to just some political bent of the individuals involved. But we continue to believe that this will be an important legislative item in the months and years to come, and I think it has significant security implications for organizations, like what does this really mean in terms of drug screening and your employment base, particularly if you’re in a regulated industry where federal law governs this area more so than State law? And here I’m specifically thinking about the financial services industry, healthcare, law enforcement and others.

Bryan Strawser: Our fifth look going into 2020 is that the strife between Hong Kong and China will continue. We expect that it will become more violent on both the part of protesters and by law enforcement or intelligence agencies operating in Hong Kong, and also that China will become more authoritarian over time in Hong Kong. There are some treaty restrictions on China that I believe end 2047 in terms of changing Hong Kong basic law, but I don’t believe that China is going to wait before they take more authoritarian steps, whether that’s approved through a legal framework in Hong Kong or not, we expect that disruption will continue. Businesses that operate in Hong Kong, or have ex-pats in Hong Kong, or who travel to Hong Kong will need to continue to evaluate the situation on the ground and take the right steps for continuity of operations and safety and security of their personnel and their families as necessary.

Bryan Strawser: Back in 2018, the beginning of 2018 as we forecast the top global risks for the calendar year 2018, there were three technologies that we saw as being on the rise that we believe will continue to rise in importance and focus in 2020, and those are automation, robotics, and artificial intelligence. Automation in that finding ways for machines or computers to automate work that’s currently being done by humans. I can’t tell you the number of areas in our business alone where automation has come into play in an intelligent manner, a rules-based manner, and then moving more towards an artificial intelligence type of situation. And robotics is similar, that robotics will continue to, in some cases replace work that is being done by humans.

Bryan Strawser: I think these three areas of technology, automation, robotics, and AI, all are ones that companies and individuals should be monitoring. Companies from the standpoint of these are areas where they might gain efficiency and improve productivity, but also that by becoming more reliant upon technologies, the potential disruption can increase. And from a personal or professional standpoint, if you’re a worker who is in one of the fields that could be most heavily impacted by automation and artificial intelligence, that you’re thinking about how this might have an impact on you, and that you’re thinking about how to adjust your skills and gain new skills now rather than the two or three years down the road before this may have a bigger impact in your industry.

Bryan Strawser: I think just a personal example, one thing that I’ve seen this year as I’ve talked with clients, and I’ve toured sites, and I’ve gone to trade shows, and I’ve talked to the leaders in these areas, seeing where security robotics has evolved over the last couple of years from say five years ago where I first saw an autonomous security robot that was patrolling a single-story building at the ASIS Global Security Exchange Show in Chicago back in September, I saw my first robot that could navigate between floors, that was tied to a centralized global security operations center where they can interact with acumen via the robot, where it could access your access card data, it could do facial recognition, it could recognize what was happening around it, it could create different effects based upon the rules that it was given or programmed or learned over time. These are all fascinating increases in technology, but again, it poses rest for both individuals and companies.

Bryan Strawser: And then just lastly, that we expect to global uncertainty to continue. We expect that it will be more risky, so to speak. There’ll be more risk in your operations in 2020 than there were in 2019. We don’t believe that that will continue. We don’t believe that will decline anytime soon. From our standpoint, we live in highly uncertain times. The rule sets that once governed how the world interacts have changed before our very eyes this year, and as we’ve said before, remain very unsettled, they remain very unsettled these rule sets.

Bryan Strawser: Companies that wish to continue their success in the year ahead are going to take the right actions to ensure their resilience against disruption. We should have a clear-eyed view of the threats and risks around us. Companies should continue to invest in their robust crisis management capability and ensure that they have well-practiced plans that can be implemented when the critical moment is upon their organization.

Bryan Strawser: Again, this is our final episode for 2019. We wish you great luck and much success in the year ahead. Thanks for listening.