The recent active shooter events in Orlando, San Bernardino, Paris, Munich and beyond have provided some important lessons for every human being. If we learn from these lessons and respond in a proactive manner, those hundreds of lives will not have been lost completely in vain. Those who work in enclosed facilities can draw especially valuable lessons from the recent active shooter events.

The Options: Run, Hide or Fight

Instead of asking employees to make split-second decisions in the midst of a dramatic active shooter scenario, employers are now actively addressing the uncomfortable possibility of violence in the workplace. A growing number of employers are asking employees to develop a plan of action in the event of such a dire scenario. Employees are taught that there are three possible reactions to an active shooter: Run, hide or fight. They are encouraged to choose the active response of fighting rather than the passive response of running or hiding. Even the Department of Homeland Security has endorsed the “fight” response. Though most authority figures recommend that employees exit the building if they have a direct means of exiting, those who are in a position to take the shooter down are encouraged to do so. The logic in this “fight” approach is that it will take a while for police to arrive on the scene. If those who are closest to the gunman are able to disarm him, they could save numerous lives. 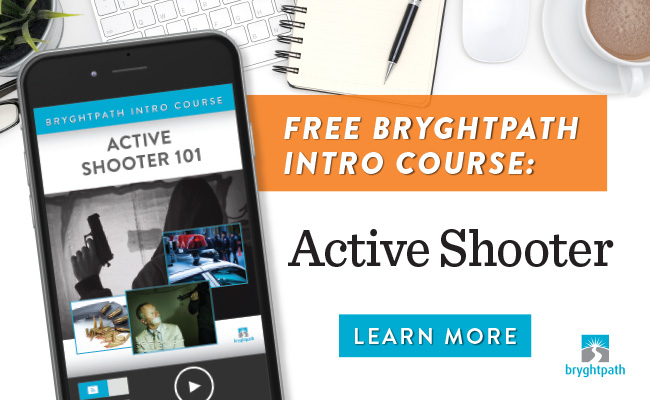 It is no Longer About Hiding

Businesses, schools, government offices and organizations of all different varieties are implementing active shooter training for employees. It wasn’t long ago when the average workplace had absolutely no standard operating procedures for such dire scenarios. People would instinctively run in response to shootings as they had no other planned method of recourse. Now, employers across the globe are training workers to stand up for themselves and their co-workers by engaging in active shooter mock scenarios. This sort of charade might have seemed egregiously paranoid half a decade ago. In light of the seemingly never-ending string of shootings, such training scenarios are welcomed with open arms.

The point of practicing active shooter scenarios is to empower employees to prevent a massive loss of life and debilitating injuries. After all, these disastrous events typically involve a lone wolf shooter and plenty of employees. Employers are hiring former SWAT team officers, military veterans, actors and others to make role-playing exercises as close to reality as possible. Employees are trained to respond to active shooters in a strategic manner rather than simply running as fast as they can to the nearest building exit point or ducking in a space with little visibility. Hiding in a supplies closet or crouching beneath a desk does nothing to stop the bloodshed. Employees are now being trained to respond to shooters in a proactive manner by rehearsing responses in which they attempt to bring the shooter to the ground and disarm him. This offensive approach to shootings is quickly gaining ground throughout the world. Even college students are getting in on active shooter role playing scenarios. University of Toledo students are taught specific techniques to successfully swarm a gunman and disrupt him to the point that he can no longer fire his weapon. It is a stark contrast to the decades upon decades during which students and employees were told to go into “lock down” mode and take shelter until armed authorities arrive.

It wasn’t long ago when employees would shrug off co-workers’ angry utterances and questionable behaviors. Nowadays, employees are encouraged to call attention to such red flags by notifying their superiors and human resources managers. Those who have paid close attention to the string of shootings over the past couple of years are becoming increasingly aware of violence indicators. Whether it is cursing out a co-worker, expressing sympathy or solidarity with terrorist groups or displaying signs of violence, more and more people are paying closer attention to those who work and live around them. The importance of this heightened awareness cannot be overstated. If more employees, students and everyday people report suspicious behavior to those in positions of authority, the odds of even more active shooter incidents will be greatly reduced.

Everyone has the Potential to be a Hero

Stopping an active shooter does not always require a gun. Though an armed response to a gunman will certainly decrease the odds of mass casualties, it is not feasible for every employee to carry a gun. In many instances, it is illegal for employees to bring a gun to work even if it is for purposes of self-defense against a cold-blooded killer. However, everyone has two hands, muscles and a brain.  If a group of employees were to charge a gunman from different angles, hit him over the head with a heavy object or tackle him, he would not be in a position to wreak havoc on a workplace. Running in fear is not always the best course of action. In the end, everyone should realize they have the potential to be a hero by saving their own life as well as the lives of those around them.

Omar Mateen shot up Orlando’s Pulse nightclub on June 12, 2016. He was a young, attractive, married man who once worked as a security guard. Such an individual does not seem like the type to shoot up a nightclub full of partiers. This is an extremely important lesson everyone must learn: Shooters might not look or sound the part. They aren’t always the extremely quiet lone wolf types who do not interact with their co-workers and community members.

Psychopaths are awfully skilled at presenting a highly polished public image while keeping their true motives and feelings a secret. If certain factors trigger a potential shooter’s rage, he can quickly transform from a seemingly normal person into a raging lunatic who shows no regard for humanity. This is not to say that every human being is capable or likely to become a killing machine. Rather, it is a testament to the fact that you can never really get inside another person’s mind even if you think you know him well. It is our hope that we have all learned to never let our guard down while at work, school or in any other public arena. There is always the potential for a shooting scenario to unfold, even in the safest suburb or seemingly civil public space.

We can help. Read more about our emergency planning services, or contact us today!

Bryghtpath CEO Bryan Strawser named a 2017 Humphrey Policy Fellow
Next Post: How a Crisis Situation Is Really an Opportunity for Your Company to Lead